The King of Jordan sits at his ham radio, inviting strangers to the palace. I visit my assistant mistress. “Well, Azalea,” I say, sitting in the best chair, “what has happened to you since my last visit?” Azalea tells me what happened to her. She has covered a sofa, and written a novel. Jack has behaved badly. Roger has lost his job (replaced by an electric eye). Gigi’s children are in the hospital being detoxified, all three. Azalea herself is dying of love. I stroke her buttocks, which are perfection, if you can have perfection, under the capitalistic system. “It is better to marry that to burn,” St. Paul says, but St. Paul is largely discredited now, for the toughness of his views does not accord with the experience of advanced industrial societies.

from Donald Barthelme, “The Rise of Capitalism” 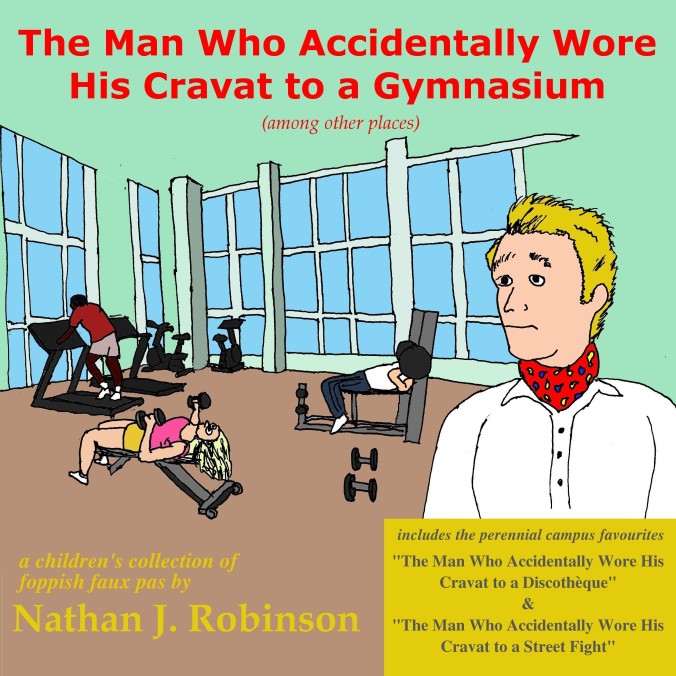 My children’s book, The Man Who Accidentally Wore his Cravat to a Gymnasium, is now commercially available.

The Uruguayan political prisoners may not talk without permission, or whistle, smile, sing, walk fast, or greet other prisoners; nor may they make or receive drawings of pregnant women, couples, butteflies, stars, or birds.

One Sunday, Didasko Perez, school teacher, tortured and jailed for having ideological ideas, is visited by his daughter Milay, age five. She brings him a drawing of birds. The guards destroy it at the entrance to the jail.

On the following Sunday, Milay brings him a drawing of trees. Trees are not forbidden, and the drawing gets through. Didasko praises her work and asks about the colored circles scattered in the treetops, many small circles half-hidden among the branches. “Are they oranges? What fruit is it?”

The child puts a finger on his mouth. “Ssssshhh.”
And she whispers in his ear: “Silly. Don’t you see they’re eyes? They’re the eyes of the birds that I’ve smuggled in for you.”

“Forbidden Birds,” from Eduardo Galeano, Memory of Fire: Century of the Wind, p. 231 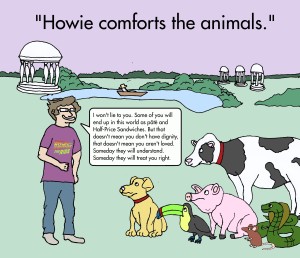 “While the aristocracy was in the ascendant, patient hirelings used to apply their knowledge of hydraulics to the working of fountains, as in Versailles, or they devised automatic chess-players, or they contrived elaborate clocks which struck the hour, jetted water, caused little birds to sing and wag their tails, and played selections from the operas.”

ADF, etc. provides complimentary copies of Fats Domino singles to students in need. Our organization recognizes that achievement can be built only atop a strong foundation of that sweet bayou piano-rollick, and to that end, we partner with local and community groups to ensure that no young person goes without a healthy quantity of their daily nutritious Fats.

I write to you today from the skies above St. Louis, which I am flying to in order to find and befriend rock n’ roll pioneer Chuck Berry (who is 86 and might shortly expire). As a secondary mission I have been dispatched on a fact-finding mission sponsored –but not paid for– by the Libertarian Municipalist Congress of Sarasota, which has asked me to assess the revolutionary potential of this great American gateway-city.

To what degree do you think compromise with evil is justifiable? Also, how do you feel about kolaches? This morning I found myself embroiled in a shouting-match with a Texan who had become tired of them. I really do lose hope when I meet such people.

P.S. Please reply when possible; I now need your opinion on a series of matters including:

the advisability of godlessness, Kronstadt, whether sporting events can be made socially healthy, good lemon bar recipes, how to banish masculinity while preserving men, the legacy of Buster Keaton, favourite subspecies of rattlesnake, the myth of Sisyphus, thoughts on pinstripes, Marshal Tito, the New Orleans “second line” and how it can be spread, whether Marmite is as wretched as my non-English peers keep insisting, what to think of conchologists, by what means our worldwide system of criminal wage-slavery ought to be illuminated and destroyed, which Monkee was most adorable (conventional wisdom has Davy, I say Michael), whether aesthetic bliss is ever an acceptable substitute for moral decency (see Orwell’s assault on Dalí and V. Nabokov’s defence of “apolitical” writing), the virtues and defects of nationalism, the murder of Fred Hampton and why they’ve all stopped talking about it (should we put up some reminder-posters or something?), how to deal with Seasonal Affective Disorder, how to attend a law school without constantly wanting to throw up, how to get to Havana in the last fragile years before capitalism finally sweeps in and pawns all those great 1950’s Chevrolets, the ethical responsibilities of scientists and technicians, whether Slavoj Žižek is totally full of shit, which Sly & the Family Stone album was best (yes, “There’s a Riot Goin’ On” makes a statement but damn if I don’t get depressed listening to that thing, which I certainly don’t with a more jubilant platter like “Dance to the Music”), whether Americans should be forced by the state to use roundabouts, dual power, the utility of universities, and a pet theory I have about James Brown and totalitarianism.

I also need to know whether you think I should accept a proposal a classmate has just given me to start a law firm that specializes in bringing lawsuits on behalf of dog-owners against police forces who have shot said dog-owners’ dogs during raids.

Damn it, ______, you are the only person here whose judgment I trust on these concerns.